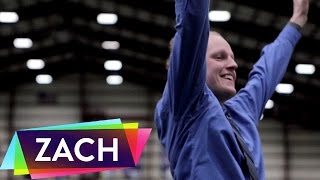 It’s not always that you know approximately how many months you have left to live, but for Zach Sobiech from Minnesotam, USA, unfortunately he knew his days were numbered.

However, instead of just sitting in fear, Zach decided that he was going to make the most of life and live everyday to the fullest.

At age 13, Zach was diagnosed with osteosarcoma. CBS reported that during his treatment he underwent 10 surgeries and 20 rounds of chemotherapy. In May 2012 his doctors informed him that he had up to a year to live. Zach said: “I’m not good at writing letters. So I figured instead, I could just write songs for people, and they might be around longer. It’s more powerful than writing a letter because a song can get stuck in your head. You find yourself humming it during the day.”

That’s when Zach wrote and recorded his song, Clouds, and released it as a YouTube video which then went viral surpassing 3 million views. Other artists subsequently began releasing tribute versions of the video, the most notable of which was released on Rainn Wilson’s YouTube channel, SoulPancake, who then released a documentary on Zach called ‘My Last Days’, where Zach and his family talk about his illness and people commend him on his positive approach to life and his final days.

I won’t go into too much detail, but if you watch the documentary, you will understand how much of an inspiration Zach Sobiech was and still is. He released another two songs – ‘Fix Me Up’ and ‘Sandcastles’ – with Sammy Brown.

Sadly, Zach lost his battle to cancer on 20th May 2013 at 18 years, but thankfully, his wish to be remembered as a kid who went down fighting has come true as he inspires the world with his story and his music which will be played everyday by numerous people across the globe – especially his family, who have established The Zach Sobiech Osteosarcoma Fund at Children’s Cancer Research Fund.

Rest in Peace, Zach. You were and still are an inspiration to many.

More information about Zach and his condition here http://www.childrenscancer.org/zach/